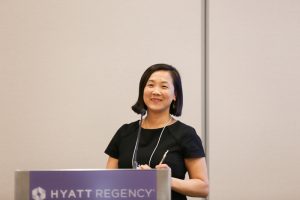 “Complexity can be fun.” These parting words from Dave Gibbons, president and chief executive officer of the Elberon Development Group, best summed up the 2018 Redevelopment Forum’s panel on Trends in Redevelopment Finance. In front of a standing-room only-crowd, Jong Sook Nee Esq., co-founder of NeePlata Law LLC, moderated the panel that included Leslie Anderson, executive director of the New Jersey Redevelopment Authority; Valerie Jackson, director of the policy, planning, and development department for the City of East Orange; and Mr. Gibbons. 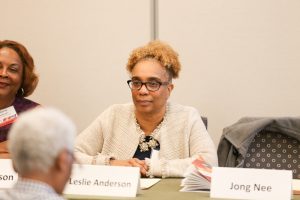 Ms. Anderson shared her insights from her 20 years at the New Jersey Redevelopment Authority (NJRA). She talked about how a rehabilitated building that is part of a community is often more than just a structure, especially to a person living or working in it. “It’s brick and mortar, but it’s a person’s life.” She told potential applicants the NJRA seeks to hold the first lien on a property, and she shared strategies to help secure project funding.

Ms. Anderson then spoke on the timely topic of Opportunity Zones, which she described as “new market tax credits on steroids.” Investment periods in the Opportunity Zones,she noted, could be five or 10 years, and that a 10-year investment could result in certain permanent capital gains exclusions. New Jersey’s list of possible Opportunity Zone Census tracts was submitted to the U.S. Treasury Department on March 22.

Ms. Jackson provided attendees with descriptions of some of the current financial vehicles used to support redevelopment, including payments in lieu of taxes (PILOTs) and redevelopment area bonds (RABs). She stressed that PILOTs tend to be misunderstood; they are not allowing developers to pay less than their fair share.

Mr. Gibbons spoke about his experiences as a practitioner working with municipalities and funders. He made a point of emphasizing the effectiveness of the currently defunct Urban Enterprise Zone program, which Gov. Murphy is considering renewing.

A recurring theme at the session was that it takes a lot of skill to mix and match funding sources and evaluate individual needs. Ms. Jackson warned those in attendance to “expect the unexpected” when going through the redevelopment process. With recent changes to the tax code and a new administration in Trenton, more changes are likely to be coming to the world of redevelopment finance in 2018.