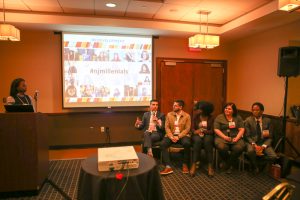 So why are they leaving? New Jersey Future sought answers straight from the source. At the 2018 Redevelopment Forum, the Millennial Town Hall featured Millennial panelists in a discussion about the heart of the issue: Why are their friends leaving New Jersey, and what would convince them to stay? 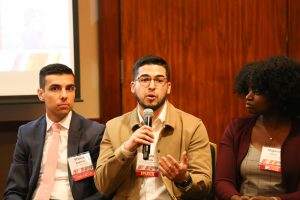 Statistics indicate that Millennials in New Jersey are struggling to afford their own homes. New Jersey has the highest rate of 18-to-34-year-olds living with their parents: a stunning 47 percent. In contrast, that number is 37 percent in Pennsylvania and 33 percent nationally. McKoy noted that, according to data from the Internal Revenue Service’s Statistics of Income, approximately 80 percent of Millennials who leave the state are making under $50,000 per year. Simply put, Chery said, “It’s expensive to live here.”

A larger selection of affordable housing would help Millennials stay, as well as more diverse housing options. Bautista pointed out that Millennials struggle not only with their own expensive housing, but with the need for larger apartments as they start families. The affordability struggle is worsened by the fact that many Millennials are already financially burdened by college debt while, as McKoy pointed out, wages have been largely stagnant. He suggested raising the minimum wage. 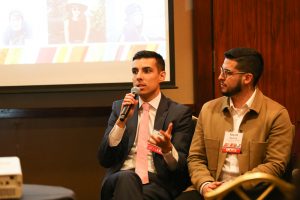 “The biggest factor is jobs,” said Baptista. Even in cities like Newark, with numerous amenities and activities, “the pipeline for young people to plug in is just not there.” He contrasted this with New York City and Philadelphia, which offer more jobs that lead to career advancement and larger professional networks. “Until we figure out the jobs piece, it’s hard to recruit folks early in their careers to cities in New Jersey,” Baptista said.

New Jersey Future’s research found that Millennials who stay in-state tend to cluster in dense, walkable areas, such as urban centers. This generation prefers to live car-free or “car-lite,” within walking distance of work, entertainment, and amenities.

Personal anecdotes from the panelists mirrored this trend. Moderator Kandyce Perry, who lives in Philadelphia, does not own a car. Cailean Kok and her husband lived without a car for three years, commuting by transit. (Subsequent career changes have required them to purchase one car, which they share.) McKoy and his wife commuted by car from outside Trenton to their jobs in the city until, he related, “We said, let’s stop making this hard on ourselves.” Their move to Trenton was partly motivated by the fact that both of them would then be able to walk to work. 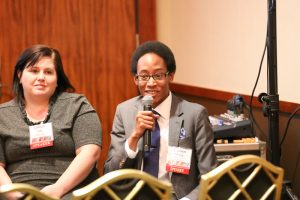 The walkable, urban lifestyle is facilitated by public transit. Kok cited transit as one of the reasons she stays in Newark. McKoy chose Trenton over other walkable towns like Lambertville because of its transit station. In order to make towns more attractive to Millennials, he said, “It would be key to have transportation.”

“We have to fight for better transportation, better transit,” Bautista concurred. As part of his mayoral campaign in Hoboken, he advocated for a bus rapid transit system. The buses would travel in dedicated express lanes, mitigating traffic by reducing the number of car commuters.

As Millennials start families, good schools play a role in where they want to live. This presents a challenge for municipalities with struggling school systems. Baptista said that towns should focus on improving their schools not just to retain professional Millennials, but also for the existing community: “We shouldn’t have it as a zero-sum game.”

McKoy noted that central New Jersey—Trenton, specifically—is the only place from which you can travel to both Philadelphia and New York via a one-seat train ride. Trenton and the surrounding towns also have many Revolutionary War and other historical sites that remain undersold. “There’s no reason central Jersey shouldn’t be a hotspot for tourism,” McKoy said.

Place-based tourism could also play a larger role. McKoy advised emulating cities like Providence, which capitalized on its recently daylighted rivers to create the popular WaterFire attraction. Kok said that “Have You Met Newark?” tours helped persuade her to move to that city.

Despite its urban reputation, New Jersey also has extensive natural areas like the Delaware Water Gap that are often overlooked. Hon. Dawn Zimmer, mayor of Hoboken from 2009 to 2017, said after the panel, “The Millennial Town Hall was very informative and helpful to better understand the concerns and perspectives of young professionals in New Jersey and what would entice and enable them to stay in our State.  I asked the panelists about the importance of promoting access to the outdoors, such as places like the Delaware Water Gap Recreation Area and the Delaware Canal. Each panelist seemed to agree that the outdoors matters and NJ has some great outdoor places to promote more!”

Kok suggested partnering with outdoor recreation companies like REI to offer transportation from Newark or Hoboken to state and county parks.

Panelists repeatedly cited New Jersey’s vibrant diversity as a reason to live in the state. Kok said, “The biggest thing that keeps me in New Jersey is the diversity in food and people.” Chery agreed: “Diversity is very important to me.” She thinks of it as something the state could promote more as an asset:  “We don’t do enough to celebrate the richness we have.” In municipalities and neighborhoods where segregation is still a problem, promoting integration can improve the sense of community. Baptista suggested using art as a tool for breaking down racial and cultural barriers.

In general, a sense of community encourages residents to invest in their place. Kok enjoys Newark’s many opportunities for engagement. She mentors children through Big Brothers Big Sisters. The importance of involvement, she said, is that “If I understand who my neighbors are, I’ll care more and want to be part of the solution.” Ultimately, the panelists agreed, places that are good for Millennials are good for everyone. Chery said, “We can’t just be looked at as an isolated group.” Policies that focus only on young adults won’t work if they don’t also help Millennials’ parents and children.

The panel’s comments resonated among municipal administrators and officials in the audience. Rebecca P. Feldman, administrative analyst for the Town of Morristown, reflected that her parents’ experience of searching for affordable housing downtown in a place with transit, cultural diversity, and good schools mirrors that of Millennials today. Yet, she said in an email,  many municipalities have prioritized commercial development over environmental and historic assets, in the process failing to attract and keep keep good jobs and leaving suburban homeowners with the ever-increasing property tax burdens. Acknowledging that challenges facing Millennials are challenges affecting everyone, Feldman said, “My advice to all of the panelists is this: Run for office. New Jersey needs you.”

For more coverage of this session, please see this NJ Spotlight article.