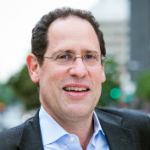 This is a reversal, Katz says, of the governance model the United State built in the mid-20th century, which he described as “highly specialized, highly compartmentalized, and highly bureaucratic,” making it ill-equipped to deal with the complexity and multi-functionality of current challenges. Cities as networks, he said, are much better equipped, since they’re not compartmentalized — they can leverage public, private and institutional connections as needed. He calls this “the new localism,” also the title of his new book, co-authored by Jeremy Nowak and published by Brookings Institution Press.

This approach to problem-solving is new, he says, and needs new norms and models around growth, governance, and finance that codify best practices and then adapt and adopt them across cities and countries. He cited three lessons learned from places that are doing this well. Pittsburgh began its reinvention after the Three Mile Island disaster. The earliest advances in mobile robotics were developed in Pittsburgh to help with post-disaster cleanup. Almost 40 years later, that work has led to the rise of autonomous vehicle technology, and has sparked the growth of a dense, proximate technology and innovation network that includes Carnegie Mellon, the University of Pittsburgh, Duquesne, and other institutions. The city has been intentional in connecting research, economic development, entrepreneurialism, workforce development, transportation, housing and philanthropy into a fully networked system.

Katz claims that whichever states are first-movers in next-generation innovation and technology now will be on the ground floor of half of global GDP in 20 years. For this reason, he points out, global companies are coming to Pittsburgh without incentives, because they want to be near this thick ecosystem of innovation.

Be an Ecosystem, Not an Ego-System

In Indianapolis, business, political, and civic leaders realized they would have to restore the city’s hollowed-out core or it wouldn’t prosper. So they first developed a vision of the region as the amateur sports capital of the country, and set about building to fulfill this vision. To do this, the Indiana Sports Corporation was formed — a seamless public-private-civic collaboration that worked together to build sports facilities.

Using that model, city leaders refocused their economic-development efforts on biotech and life sciences, under the auspices of the newly formed Central Indiana Corporate Partnership — a collaborative of 60 corporate chief executive officers, plus the philanthropy and university communities, but not the public sector (although the organization works with the public sector). The partnership began to pick the industry clusters at which the city excelled, and invested in those clusters at scale and in a sustained way, forming the Indiana Biosciences Research Institute to recruit research faculty to Indianapolis from all over the world. As a result, the city is now no. 2 nationally in the biotech and life sciences sector.

One key to this success is that the partnership has, as Katz put it, “perfected mechanics of collaboration.” It is the principals who show up for meetings, and they “meet to decide, not to discuss.” They have been able to organize large amounts of private and civic wealth toward their mission of investing smartly to steer and steward the regional economy. “Capital in the United States is not the constraint,” said Katz. “Connecting capital to smart investments is the issue. That’s what Indianapolis has perfected.”

Be In for the Long Haul

The city of Copenhagen, Denmark, was fiscally bankrupt 30 years ago. In the late 1980s early 1990s, national and city leadership got together and decided to make a very large bet: They wanted to develop a 21st-century subway system as a catalyst for economic revitalization, but they wanted to do it without raising any taxes. So they created a publicly owned, professionally managed corporation that took over all the publicly owned land in two key core areas of the city. The corporation began to redevelop the properties, taking equity positions in many of the deals in order to let the public participate in the increase in value. The resulting revenue has been sufficient to service the debt on the new subway system. The corporation was successful because it took the long view rather than focusing on the next election cycle, managing like a private corporation in order to get maximum yield, then investing for high public return. Also critical to this success was knowing “what the government owns, not just what it owes,” as Katz put it. Governments are often the owners of an enormous amount of public wealth, he said, but most of them, particularly small, fragmented ones, don’t fully organize or capitalize on it.

Building a Nation of Local Problem-Solvers

So how can we build a nation of problem-solvers, especially in a state like New Jersey, that is so intensely localized? First, Katz says, we need to focus on investing in innovation, not consumption.

Next, he says, we need to formalize our efforts at collaboration, and focus them on pushing innovation in the areas in which we excel. We have an ethic of collaboration and volunteerism in this country, Katz continued, but it’s fairly unstructured and under-capitalized. We’re not building formal institutions. Instead, he says, we should have public, private, civic, and philanthropic institutions working so closely together that they form a thick ecosystem that can withstand any number of local shocks and any amount of global competition.

The challenge over the next decade, Katz continued, is to create a totally different class of city and metropolitan leaders who see themselves as vanguard problem-solvers, and a different kind of institutional structure and framework, so we can get about the business of investing in the future. We are the wealthiest nation in the world, he finished, but we haven’t been able to connect capital to what we need to invest in. We have the opportunity to figure that out at the local level, and then we can reverse-engineer it up to the national level.